Adored for their magnificent presence in display beds and abundant cut-flower arrangements, Orienpet Lilies contribute spectacular color and form, statuesque height and cherished fragrance to mid-summer gardens. With so many summer gardening tasks to be accomplished, it is a gift to have Lilies burst into bloom, having required no care since their fall planting. 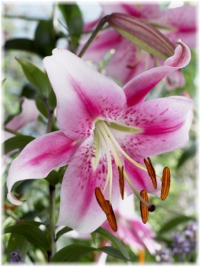 Well-Bred for Beauty, Strength and Fragrance
The class of Orienpet Lilies, also known as 'OT' Hybrids, was created by breeders who crossed Chinese Trumpet Lilies with Oriental Lilies. Well-bred Orienpets inherited the best of both parents...and then some. These prized interspecific crosses have superior disease-resistance, enhanced reliability and endurance, better naturalizing capabilities and are more drought-, cold- and heat-tolerant than either parents.

Orienpets bloom earlier than Oriental Lilies with a lighter, yet most alluring fragrance~almost like a dreamy combination of raspberries and roses. The imperious height and thick, almost sapling-like stems of the Orienpet Lily seem more imposing and substantial than that of the Chinese Trumpet Lily. Imagine a flower-laden, 6-foot+ Orienpet Lily standing straight up all by itself without staking. It happens. Some of our thrilled clients report them growing over 10 feet tall (without the need for stakes). Some even call them "Tree Lilies".

Orienpet Lily flowers are huge and substantive in the shape of a modified trumpet with slightly recurved petals and a thick, waxy feel. The flowers are durable, strong and long-lasting~both in the garden and the vase. As each bulb matures in the garden over time, the plants will become increasingly more 'jack-and-the-beanstalkish'~growing in size and stature, cloaked with an increasing mass of colossal, fragrant flowers.

Amazing Cut Flowers
This past weekend, we cut short stems of Orienpet Lily Lavon for vases when dear friends visited for the weekend. Our normal 'hold and cut' snippers were not able to make their way through the stems that truly were like sapling trunks. Just one stem more than filled each vase with waves of huge, thick buds opening day after day. It was, and continues to be, an amazing, big show. By cutting short stems and leaving at least two thirds of the stalks to grow, the bulb will be fed with ample photosynthesis. A stolen stem here and there shouldn't affect long term performance in display beds. Orienpets are hardy attention-getters. 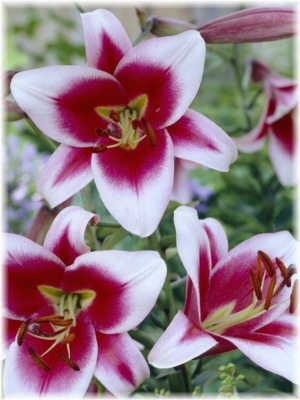 The Best of All Orientpets
Our collection of Orienpet Lilies includes the best of the new varieties: Anastasia (white and deep rose), Conca d'Or (pale to deep lemon-yellow), Friso (raspberry-red and white), Holland Beauty (garnet-red with ivory-yellow edges), Honeymoon (honey pale yellow), Lavon (pale yellow and raspberry-brick), Montego Bay (raspberry and yellow), Olympic Torch (mauve-pink and burgundy), Purple Prince (spectacular grape maroon-purple) and Satisfaction (raspberry-red and yellow). You'll be seen as an avant garde garden designer with these Orienpets~they're virtually impossible to find in local shops, and certainly not in any big box stores. They are absolutely addictive. 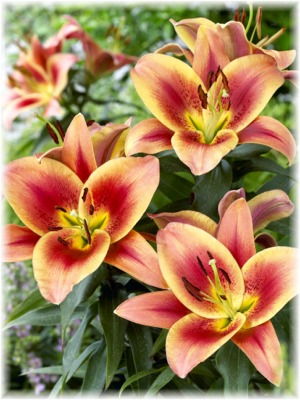 Easy Fall Planting
Among the last of the fall harvested flower bulbs, Orienpet Lilies ship in mid-October just as soon as we receive them in our warehouse from the Netherlands. Hardy for horticultural zones 4 through 8 (and maybe even 9), Orienpet Lily bulbs should be planted in the fall when the soil has cooled down to about 55 degrees F (after two weeks of sweater weather when night time temps have hovered in the 40s). Orienpet Lilies need a minimum of six hours of daily sunlight and well-draining, neutral pH soil.

These 14/16 cm bulbs should be planted 6 to 8 inches deep and 8 to 10 inches apart with the pointed sprouting tip up and the basal plate (bottom of the bulb where the roots grow) down. Planting Lily bulbs in the fall rather than the spring affords them the time to set down roots and get established before the warming spring soil demands top growth. Space the bulbs properly to make sure there is good air circulation between the plants so that the leaves can easily dry off after rainfall. This helps to keep the foliage and plants healthy.

Over time, Orienpet Lilies benefit from a 4-10-6 granular, organic fertilizer top dressing three times a year: at fall planting time, in the early spring when the sprouts emerge and when the flower starts to die back in late spring. (Don't ever put fertilize in the planting hole: it could cause root burn that would stunt plant growth.) If winters in your area bring temperature spiking and inconsistent snow cover, a 2 inch layer of mulch may be applied after the surface of the ground freezes. Good mulching mediums include straw, salt marsh hay or oak leaves. Prior to planting, Orienpet Lily bulbs may be stored in a cool, dry place with low humidity, away from heat, frost and strong sunlight at a temperature between 50 and 70 degrees F.