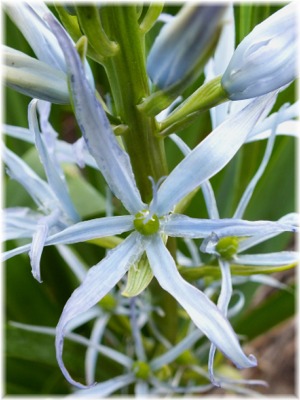 One of the most sought after colors for spring garden retreats is pale blue. Real pale blue perennials are rather uncommon, so when we find one that we adore, we have to share it with you. Pale blue flowers planted in substantive clusters among verdant green hostas, ferns and early summer perennial foliage creates the look and feel of an upscale, relaxing sanctuary garden. 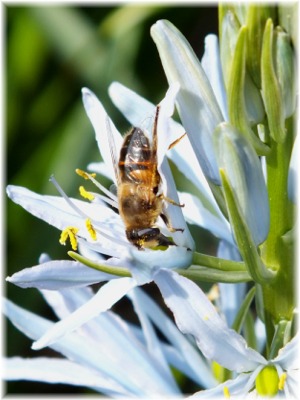 It is the most delicious, heavenly shade of pale blue imaginable. Like its parents, deer- and rodent-resistant Blue Heaven has flowering racemes densely studded with delicate, six-petaled florets adorned with pale green filaments, ivory anthers and petite yellow-green centers. It has deep green, upright, sword-like foliage around the base of its flower-encrusted racemes.

Carefree and long-blooming in May/June in horticultural zone 5, its bee-loved, dainty star-shaped flowers start opening from the bottom of its flowering racemes, eventually blooming to the top of its cigar-like blue-green spikes. Growing from 24″ to 30″ tall, Blue Heaven grows into increasingly more substantive plants as it matures over the years. 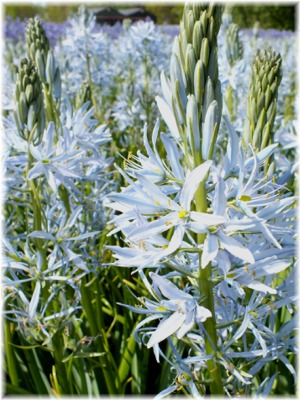 Northwest Pacific U.S. Native
As a genus, Camassia is native to America's Pacific northwest where it was known as the great camas or as quamash to American Indians. As early as the mid-1800s, Camassia flourished abundantly as wild flowers in moisture-laden soil near streams and in mountain meadows that received beneficial summer rains. 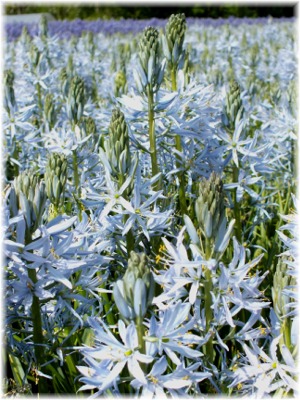 Easy to Plant
Good for horticultural zones 4 through 8, Camassia leichtlinii caerulea Blue Heaven bulbs should be planted in the fall after the soil has cooled down to around 55 degrees F (after two weeks of sweater weather when night time temps have hovered in the 40s), in somewhat moist, neutral pH soil in moderate to full sunlight: 5″ deep and 5″ apart. If you are planting them near a stream or pond, make sure to plant them above the high water mark: no bulb likes to sit in standing water, even Camassia. (Other moisture-tolerant flower bulbs include Allium triquetrum, Corydalis solida, Eranthis hyemalis, Erythronium pagoda, Fritillaria meleagris and meleagris alba, Galanthus and Leucojum.)

Top dress the garden three times a year with a 4-10-6 or 5-10-5 granular, organic flower bulb fertilizer: at fall planting time, spring sprouting time and when the flower starts to die back. Blue Heaven is a wonderful companion for many of the tall globe-shaped Allium, Brodiaea (another Pacific northwest native), other varieties of Camassia in contrasting colors, Dutch Iris, Eremurus, Hardy Geraniums and romantic trellises of Wisteria.